The Physical Cabinet is a collection of physical instruments which were used when teaching at the university. Since the end of the 17th century experiments and demonstrations have played an important part in physics education.

The first real course in Experimental Physics was held in 1731 by Samuel Klingenstierna, who in 1750 became the first ”modern” Professor of physics. The course required proper equipment and in October of 1739 the first shipment of instruments from London arrived. The foundations of the physical cabinet were laid in connection with this.

In the beginning, the collection was held in a couple of rooms at the University Hospital but over the years it has been transported between many different places. Between 1760 and 1787 the cabinet stood in the home of Samuel Duraeus, the Klingenstiernas’ successor, who had grown tired of the cold hospital rooms. And in the middle of the 19th century the instruments stood in an old jail for a few years. The contents of the cabinet have been added to many times, in order to reflect developments in Physics.

When Anders Jonas Ångström became professor in 1858, the Department of Physics and the cabinet received new premises. At that time, Physics education was changing and students were allowed to take part in experiments. This led to the demonstration objects in the cabinet and losing their appeal somewhat, but several objects were still used up until the 1950s. Since then the Physical cabinet has been an historical collection.

This beautiful fountain was originally intended as stylish decor for an affluent home. However, the fountain illustrates several interesting physical phenomena and now has a place in the cabinet. 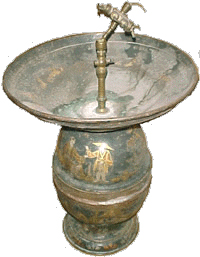 The fountain's holder was filled with water. With the assistance of a pump an excess pressure was created which allowed the water to flow through the openings in the mouth piece.

This enabled the entire mouthpiece to rotate. Both the rotating water wheel and the pressure driven fountain are inventions attributed to Heron of Alexandria (approximately 100 AD).

In 1820 Hans Christian Ørsted proved that magnetism is generated by electric currents. 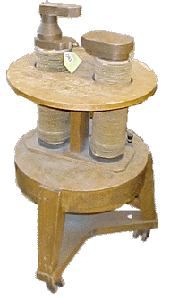 By winding a current-carrying conductor around an iron core many rounds, a powerful electro-magnet with a strong magnetic field is produced. During the latter half of the 1820s a large electromagnet was purchased for the Institute of Physics.

The magnet has an adjustable wooden table that can be set at the desired height for various experiments. During the 1930s wheels were added to the magnet's stand to facilitate transport.

The Camera Obscura was a precursor to the modern camera. 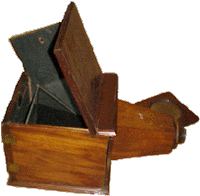 When light beams pass through the camera aperture, a picture appears on its rear panel. The name Camera Obscura is Latin for "dark room".

The principle of the workings of the Camera Obscura has been known for over 900 years.

The cabinet’s Camera Obscura was most likely purchased by Samuel Klingenstierna in 1739 or 1740.

The word “telegraph” comes from the Greek words “tele” which means remote or distant, and “grapho” which means to write. With the invention of the telegraph, messages could quickly be sent over long distances. The first practical, working electric telegraph was demonstrated in 1837 by William Cook and Charles Wheatstone in England.

The electric telegraph transmitter sends off power pulses, which affect an electromagnet in the receiver.

The Cabinet’s Indicator Telegraph pushes the electromagnet around an indicator which points to different characters.

The electric pump system was procured in the mid-1800s. The pump consists of an electric motor with two six pointed stars of permanent magnets.

The stars are driven around by two electromagnets which are fed by AC voltage.

The rotating motion is transferred to the pump with the help of two rods. This simple and beautiful design still functions properly.

This sleek "Fontaine à circulation" was procured for the Cabinet’s collection in 1819.

In the upper water reservoir of the fountain there is a hydraulic ram which drives coloured water through the pipes until the fountain has levelled off.