Portraits in the University Main Building

Portraits reflect the history of the University

The current University Main Building in Uppsala designed by architect Herman Teodor Holmgren, was inaugurated in 1887. In addition to the auditorium and lecture-halls the building houses a number of representative rooms, among them the University senate's room, the chancellery, faculty rooms and guest apartment. All these rooms are adorned with  portraits of people, above all men, who throughout the centuries have had some connection to Uppsala University. Portraits of kings, queens, civil servants and scientists contribute to covering the history of the University and at the same time manifest the long traditions and status of this seat of learning as a university.

The University as an active art collector

The first portrait donation to the University consisted of nine reproductions of Regents from the Vasa dynasty, donated by the University chancellor Magnus Gabriel De la Gardie in 1668. Included among these is David Klöcker Ehrenstrahl’s portrait of Gustav II Adolf (UU 52). A famous portrait of Queen Christina was part of Carl Hård av Segerstad’s donation (UU 381). It was painted by Abraham Wuchters in 1661, while Christina was visiting Sweden in connection with the death of Karl X. It is a moving portrait characterised by realism following the Dutch Golden Age tradition. The work of the greatest Swedish portrait painter of the 18th century, Alexander Roslin, is represented through a portrait of Gustav III (UU 288). The portrait refers back to the group portrait of Gustav III and his brother, Fredrik Adolf and Carl which Roslin painted in Paris in 1771. 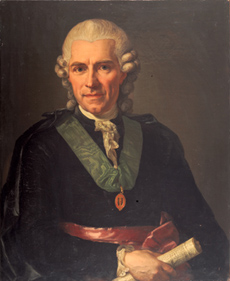 Uppsala’s many successful scientists may be represented here by a powerful portrait of the Chemist Torbern Bergman, painted by Lorentz Pasch the younger in the 1760s (UU 264). Bergman who had degrees in several subjects from different faculties can be said to be representative of his period’s multi-faceted scientists.

The theological faculty room is dominated by Emerik Stenberg’s group portrait in oil, “The Faculty of Theology 1911” (UU 322). It should be seen as a moment captured in time from a meeting of the Theological Faculty Committee. Nathan Söderblom, Sweden’s future Arch Bishop is sitting in the Dean’s seat. In the background can be the seen the artwork that adorns the walls of the room to this day.

Pictures in pictures and pictures of pictures

In 2006 the University management at the time was photographed directly inspired by the group portrait in the Theological Faculty room (UU 2977). In the portrait, present and past are layered in pictures and pictures of pictures. Lying on the table are documents and reports connected to the activities of the University management, among other things, the Bologna report. The photographers were Johan Westin, and Nils Gedda.

Reflection of a male dominated world 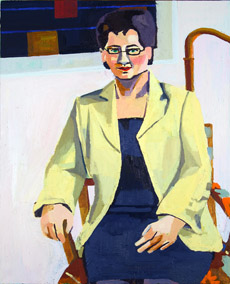 For a long time the University was a male dominated world. The first female student was enrolled in 1872. This fact is clearly reflected within the portrait collection of the University Building which consists predominantly of men. Since this imbalance reflects the University's history, it is not easy to alter, but with the acquisition of arts, portraits and other objects this is never far from sight. Thus an important addition is the portrait of former pro-vice chancellor, law professor Lena Marcusson whose portrait from 2007 by Cecilia Sikström hangs in the law faculty room (UU 2991).